Posted on 2019年7月16日 by purelycrystalsblog

When looking for ways to manage stress, people often overlook one of the simplest and most effective strategies: create a peaceful home. Because most of our days begin and end at home, having a peaceful home as your base can help you launch yourself into the world from a less-stressed place each day.

Some suggestions for you to create a peaceful home:
1. Put air purifying plants your house, don’t put too many.
2. Place natural healing stones, such as clear quartz, amethyst
3. Put wood figurine
4. Use wall decor, for example, chakra or mandala wall hanging
5. Hanging bamboo chimes or dreamcatchers

END_OF_DOCUMENT_TOKEN_TO_BE_REPLACED

How to Select a Suitable Meditation Singing Bowl

Posted on 2019年7月12日 by purelycrystalsblog

There are many meditation bowls online. For beginners, it is normal to feel headache when they see many different sizes of bowls. I think this article may help you.

We have 10cm, 11.5cm, 12cm, 13.5cm bowl, my suggestion is 12cm bowl and 13.5cm bowl. Because the size is okay and price is reasonable for most of people. I know some people like bigger bowls, as they are cost is very high, that’s why we didn’t list online.

For handle, the material is Peach wood (also can called walnut wood ). Peach is a presence of the wood feng shui element. In ancient China, people use walnut wood items in home decor.

Wood is most welcomed in the feng shui bagua areas of East, Southeast and South. As always, it is best to express feng shui elements in a subtle way, with visually pleasing and aesthetically appropriate items that go well with your home or office decor.

Kindly note: If you have questions about feng shui products, welcome to send message to us

END_OF_DOCUMENT_TOKEN_TO_BE_REPLACED

Posted on 2018年12月20日 by purelycrystalsblog

What Is Fluorite Quartz
Fluorite, as known as fluorspar, is a halide mineral, it also known as soft crystal, colorful gems, rainbow gems, dream stone and so on. Its main component is calcium fluoride, we write CaF2 in our daily life.

Why Called Fluorite
Fluorite is generally in granular or massive, with a glassy luster, blue, green or purple color. Fluorite often emits blue-green fluorescence under ultraviolet or cathode radiation, and its name is based on this feature.

Where Can Fluorite Be Found
Fluorite is produced all over the world. China is one of the countries with the most fluorite minerals in the world, mainly produced in Zhejiang, Hunan and Fujian province. Other major producing countries in the world include South Africa, Mexico, Mongolia, Russia, the United States, Thailand, and Spain. Fluorite is used as a fluxing agent in the metallurgical industry and as a raw material for the manufacture of hydrofluoric acid in the chemical industry. 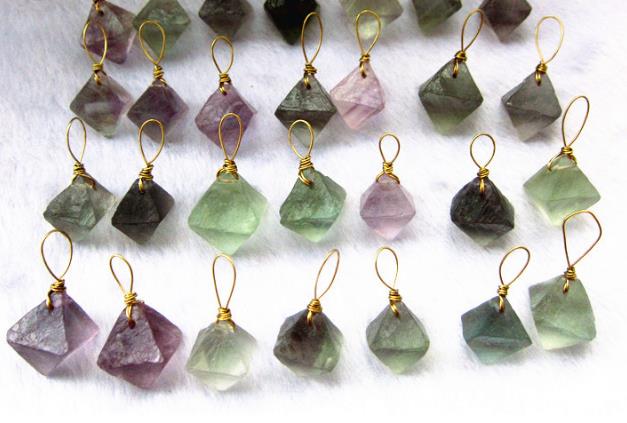 What Are the Uses of Fluorite
In industry, fluorite is the main source of fluorine and is capable of extracting fluorine and its various compounds. Half of the production of fluorite is used to make hydrofluoric acid, which in turn develops cryolite for use in the aluminum industry.

As semi-precious stone, Fluorite used often in our life. They can be cut and polished into many different figurines or crafts, they can be used in home decor and feng shui. Because of the nice color, they are used in jewelry making by jewelry designers. The cost of fluorite stones is not high, most of people can purchase them on market. We can see many fluorite crystal beads strands or pendants online with affordable price.

END_OF_DOCUMENT_TOKEN_TO_BE_REPLACED

Posted on 2018年12月20日 by purelycrystalsblog

Amethyst is regarded as a social stone, which can make people come and go in social situations. The popularity of amethyst crystal is introverted, and the heart is attracted by the heart; often wearing amethyst helps to meet the frequent. To improve intuition and subconsciousness. In the five elements, amethyst is the main fire, it can make people have tolerance, bring extravagance, and convince people with their heart, so that their subordinates can serve themselves. Amethyst stone also means of being rich. 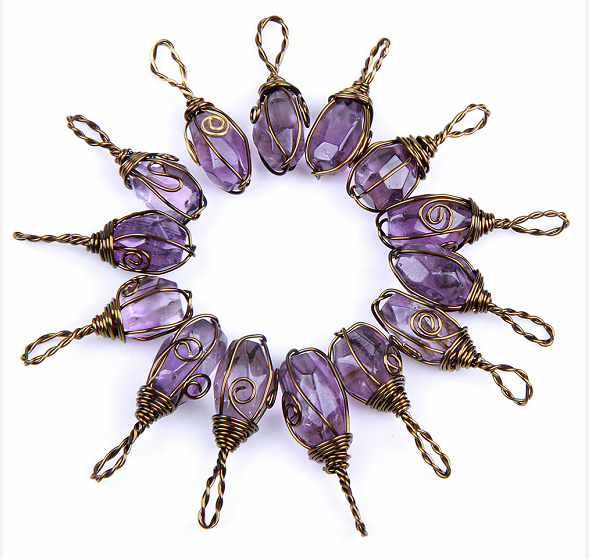 The auspicious stone of the effect of amethyst. In Greek mythology, amethyst is a symbolic jewel of the mysterious vitality of Bacchus. It is said that Bacchus can transform the vitality of sex into spiritual vitality through amethyst, and it can also play a great role in solving sexual problems and finding suitable objects. the power of. In Western countries, amethyst is considered to be the guardian stone of love, which can bring people honesty, chastity, courage and self-confidence, and can make deeper and romantic love between couples and couples. Amethyst can also make the other party loyal to their love, the marriage is full of happiness, and can enhance the relationship between human and heterosexuality. It can also help the success of love and career, and it can be used as a sentimental one, and it also represents luck.

Amethyst not only develops wisdom, helps thinking, but also helps to concentrate, increase memory and the vitality of brain cells, it helps to make the mind flexible. Therefore, amethyst is suitable for students and office workers who need long-term works.

The feng shui effect of amethyst. In Asia, amethyst is a good Feng Shui stone, which can play a role in the town house and bring good luck. Amethyst caves and amethyst clusters commonly can be used as feng shui stones in home offices. They are used in homes or in corporate offices. They have the effect of gathering gas and collecting wealth, avoiding evils. It is best to put it in the financial position. In addition, it is also good to put amethyst and stabilize the marital relationship and enhance the wisdom and concentration. It is also can be put it in the bedroom and the study place.

Posted on 2018年11月10日 by purelycrystalsblog

As a big day of aliexpress, global shopping started on 11th, November. On aliexpress.com, products will have a big discount on that day.

Unlike the precious years, the special for this year on aliexpress is the pre-order.

For pre-order items, the price will be lower than anyother time. This is a good news for customers who want to purchase on aliexpress.

Novemer is a good month for people to purcahse gifts or some other items, items can delivery before the Christmas. People have enough time to receive their parcels.

Posted on 2018年4月6日 by purelycrystalsblog

1.Health care and disease prevention anti-change.
2.Promoting blood circulation to remove the blood status and producing new blood.
3.Balance Yin-Yang so as to prevent and treat diseases and conserve health.
4.Relaxing muscles and tendons and revoing obstructionform meridians.
5.Adjusting the biological information of arrhythmias, so as to play a role for adjustment of the diseased organ.
6.Excluding the Toxin of body.

Posted on 2018年4月1日 by purelycrystalsblog

What Is Singing Bowls

Tibetan singing bowls are a type of bell that vibrates and produces a rich, deep tone when played.

Tibetan singing bowls are used for many purposes, including stress reduction and pain relief. Singing Bowl is said to promote relaxation and offer powerful healing properties. 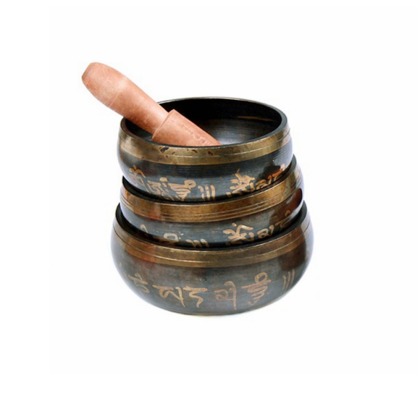 Some benefits of Tibetan Singing Bowls:

Keep chakra balancing
Reduce stress and anxiety
Lower anger and blood pressure
Deep relaxation and pain relief
Increase mental and emotional clarity
Improve circulation and increases blood flow
As an aid in meditation, yoga or a spiritual practice
To remind you of something you might have forgotten
Promote stillness, happiness and well being.
Stimulate the immune system and fibromyalgia in individuals that meditate

Posted on 2018年3月31日 by purelycrystalsblog

About vibrational sound healing, different people have their own feeling.

In quantum physics everything is just energy at its smallest level, our consiousness is projected to us with ourselves working as a reciever of a divine frequency within the pineal as symbolized in various manmade religions as the pinecone.

Negative and Positive vibrations of our actions and intentions coincide with the idea of karma, time being circular by nature and only linear by human perception and logically explained as cause and effect.

In my opinion, singing Bowls work to stimulate, balance and purify your senses, pineal frequency and chakras by sending off neutral vibrations to flush your auric field along with any negative vibrations that are stealing your clarity of thought.

The tone working as a form of mental reboot to still you in the moment so you can examine your thoughts and discover your inner self through focused intention and practice.

Just as all things are energy that are of this world, so are thoughts and beliefs, the heart gives off its own vibrations with disregard to your worldy perceptions. This is why you always hear so much about positive perception of life being advertised and spoke about, its symbolic to the true nature of existence and how you find your truth.

Posted on 2018年3月30日 by purelycrystalsblog

Tibetan singing bowls are used for many purposes, including stress reduction and pain relief. Singing Bowl is said to promote relaxation and offer powerful healing properties.

The Benefits of Healing with Crystal Singing Bowls. Vibrational sound healing can be traced back from present day trends to many ancient civilizations including India, Africa, Europe, and the Orient. In addition, each culture had unique approaches specific to their region and beliefs. Bells, chimes, bowls, gongs, drums and vocal toning, chants or repetitive sound vibrations are only a few of the many vibrational sound tools that can be used for healing.

In Ancient Egypt vowel sounds were chanted in specific keys to clear and restore balance to the chakra system. Atlantans combined sound with crystals to enhance healing. Healers today may use a combination of techniques to assist their clients.

How to Use a Singing Bowl

How to use a Tibetan singing bowl for meditation? Here are some simple steps.

Hold the bowl in your left hand. Hold the mallet in your right hand at around mid-length. Your fingertips should point down and should be touching the wood.

Using an even pressure, move the mallet clockwise around the outside edge of the bowl. Use a full arm movement and keep stirring the bell almost like soup.

Applying pressure, continue to rub the mallet around the outside edge of the singing bowl.

Note: Use your full arm to make the motion, rather than just rotating your wrist.

Posted on 2018年3月28日 by purelycrystalsblog

Fire element is considered to be the first element that was born when the universe was created. It was commonly associated with the qualities of energy, assertiveness, and passion. Fire can give warmth and enable life, and it can also burn and destroy. In the spiritual plane, Fire stands for Light and in the physical plane, it is the Sun or Flame. The element symbolizes incredible energy, activity, creativity, passion, freedom, power, love, vision, anger, strength, will, assertiveness, courage and dynamism.

It is associated with the Summer season and its corresponding direction is South. The symbolic representation of Fire is a triangle pointing upwards.

Water is accorded cleansing power. It is symbolic of dreaming, healing, flowing, fluidity, purification, regeneration, stability, strength, change, fertility, devotion, receiving, and unconditional love. It symbolizes death as well as rebirth. It is life-giving, but can also be destructive. Fresh Water stands for life and good health, while polluted/stagnant Water is symbolic of bad health.

It is associated with the Autumn season and the West direction. An inverted triangle is the symbolic representation of the Water element.

Air (also called Wind sometimes) is often seen as a universal power or pure substance. It is associated with breath of life, and attributed with cleansing power. Air symbolizes communication, intelligence, perception, knowledge, learning, thinking, imagination, creativity, harmony and travel. This source of life can also, at times, become a force of terrible destruction.

Air is associated with the Spring season and its corresponding direction is East. The Air symbol is an upright triangle with a horizontal line going through it.

The season related to Earth is Winter and the associated direction is North. The element is symbolically represented by an inverted triangle with a horizontal line running through it.